We recently announced that we’ll be moving all AdWords app install campaigns to Universal App Campaigns (UAC) later this year.

With UAC, you can reach the right people across all of Google’s largest properties like Google Search, Google Play, YouTube and the Google Display Network — all from one campaign. You also get access to ad placements exclusive to UAC, like the home and app listing pages in the Google Play Store. These placements connect you to users in “discovery mode” as they browse for their next favorite app. 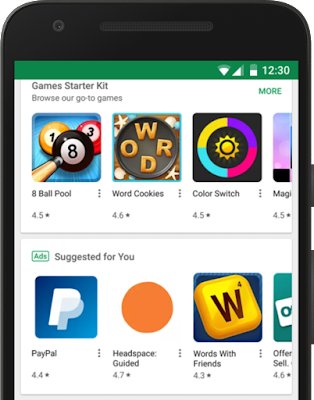 UAC uses Google’s machine learning technology to analyze hundreds of millions of signal combinations in real time to optimize your bids and ads to find the best app users for your business goals.

In this post, we’ll share some best practices on how to get the best performance from Universal App Campaigns — whether you’re looking for install volume, in-app actions or both.

Pick the right goal for your campaign

You’ll need to pick an objective for your Universal App campaign. Tell your campaign what kind of users you’d like. This means 1) identifying what you’d like your app users to do, and 2) defining the value of that action.

Example: Say you’re a mobile game developer who’s about to launch a new app. You want as many users to install your app as possible for a target cost-per-install (CPI). Say you expect 1 out of 10 people who install your game to buy a $20 upgrade in the first 30 days. You can afford to pay up to $2 per install (or $20 ÷ 10 installs). Pick the campaign objective “Install volume” and set your target cost-per-install (CPI) to $2. 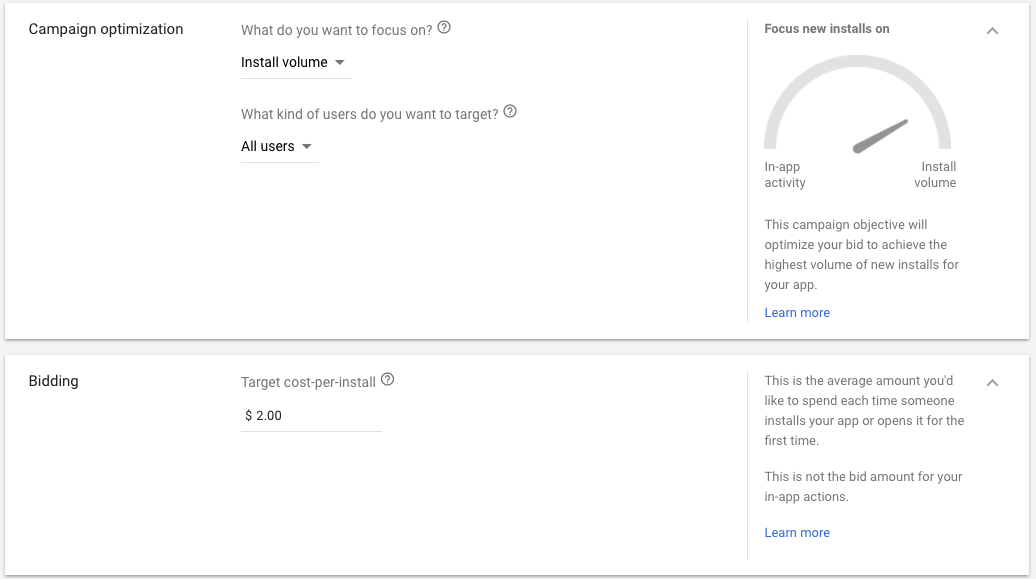 If you have multiple goals, you can set up a separate campaign for each one. Each campaign will optimize your bids and ads for a specific type of user you’re trying to reach.

Example: After launching your game, you decide you’d like more users who are likely going to buy something, like a $20 upgrade you offer.

This doesn’t mean that you’d like to stop finding other types of users. You may still want to find people who will install and engage, but not necessarily pay. You create a separate campaign alongside your first one. You set this second campaign’s objective to be “In-app actions.” You calculate your target cost-per-action (CPA) of to be $20, equal to the value of the upgrade.

Then, you decrease the target CPI and lower the budget for the first campaign focused on “Install volume.” This signals to AdWords that you’re more interested in users who are likely to complete an in-app action.

Use budgets to find the right mix of users

You can also change the mix of new users for your app as your business needs change.

Continuing the example: Say it’s been a couple of months and you’ve added a social feature and new levels to your game. You want to get this update to as many new users as you can.You adjust the target CPI and budget UP for the campaign that’s focused on “Install Volume.” At the same time, you adjust the budget DOWN for the campaign that’s focused on “In-app actions.” You’re signaling to AdWords yet another change in direction.

After setting new target bids and budgets, periodically measure results waiting for at least 100 conversions before making changes as needed. The campaign needs roughly 100 conversions to recognize and apply patterns confidently to find the users you’re looking for.

“Zynga now operates 100% of AdWords spend through UAC, however we did not get here overnight as it was a long process of testing and learning to understand how to make UAC work for us at scale. We are now able to scale up games profitably and increase operational efficiencies across all aspects of our user acquisition efforts by leveraging UAC machine learning.” – Tyson Nguyen, Senior Manager User Acquisition

“Performance is at the core of our business and Universal App Campaigns out-performed manual campaign management, allowing us to achieve efficiency at scale.” – Jonna Onselius, Mobile Marketing Manager 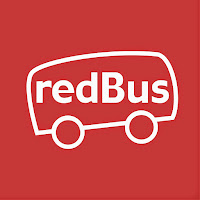 “As the largest online bus booking platform in the world, increasing bus booking transactions is crucial for our business to stay competitive. UAC helped us achieve this by maximizing transactions at a minimal cost and adapting faster to changing market dynamics when compared to standard app install campaigns.”– Rajiv Kondal, Director, Performance Marketing

Stay tuned for another blog post where we’ll talk about how to steer performance for UAC with your creative assets.

Meanwhile, you can read our best practices guide to learn more about how to get the most from your Universal App Campaigns.